Bathroom baskets are another wedding trend right now.....but I happen to LOVE the idea of them!

How many people carry pepto? Or safety pins? Hair ties?  Or even deoderant?

Well actually....I carry deoderant.  When you live in Arizona and work in a kitchen where you stand directly over flames and stick your head in ovens on a regular basis....carrying deodorant is a smart move...for everyone's sake

But while I carry deodorant on a daily basis....chances are for a wedding I wouldn't be carrying my day to day purse...but most likely a small clutch of some sort.  So my point is...chances are people wont have this stuff on them...but they could need it!

If you go on Pinterest or Google and look up bathroom baskets...you'll see dozens....hundreds.....millions.....TRILLIONS.... 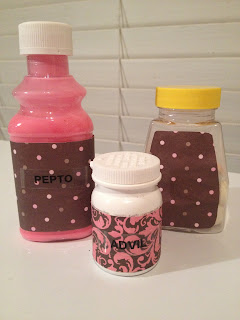 And I bought as many items in pink or brown as possible....hairbrush....pink hair ties, pink hair spray, pink tic tacs..etc

Here's some pictures of basket in the women's restroom 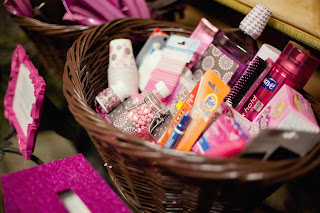 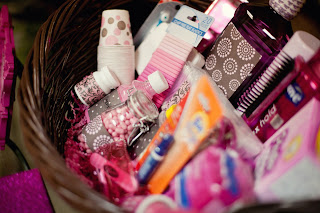 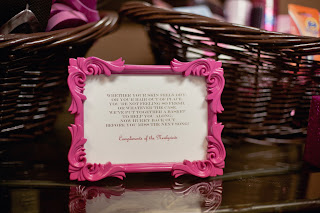 My full list of items in the basket is:

We didn't get a picture of the mens basket, but it was considerably smaller since it doesn't need the obvious girly items like tampons and hair ties

I had alot of fun trying to track everything down in my colors.  It was almost like a scavenger hunt.  I would have my mom calling me from stores telling me what she found. Most everything was from either the dollar store or travel sections

I had so many people tell me how much they liked the added touch of the baskets.  I had one of my best friends from work tell me she was SOOO happy when she say the hairspray because her hair she worked so hard on was starting to fall....she said she thinks she used half the can lol

So help yours guests out and leave them some extras!  You wouldn't want them heading out early over an upset stomach now would ya?....just direct them to the bathroom for some Tums and Pepto and get them back out on that dance floor!