This weekend I learned that MoMo is even more like a human child than even I had ever realized. I mean I knew....she's definitely more human than typical cat.....but she really proved it this weekend

Here in AZ we don't get much weather besides hot, hotter, and scorching, so as you can imagine a big storm the other night was a little out of the norm for us.

It was about 4:30 AM and both me and The Boy were laying awake in bed and talking because we had been woken up by thunder.   Suddenly there was another HUGE clap of thunder,....louder than I have ever heard in my entire life, followed by the sounds of an instant down pour.

It was at that exact moment that from down the hall we heard a "jingle jingle jingle" as MoMo came running into our room, jumped up on our bed, and nestled herself between the two of us.  Just like a scared little kid

I love that damn cat!

Later that same day she proved her baby qualities yet again.  She was laying on my chest in bed and The Boy covered the top of her with our comforter.  I decided I wanted to sit up so I swaddled her in the blanket like a baby and sat up holding her in my arms like an infant....thinking of course that any second she would jump out.   15 minutes later.....I was still holding her.

Who knew she would love being swaddled so much?

I managed to snap a few pictures.  They look like she is just laying in blankets, but that's because I took aerial shots from about the height of my head.  But just keep in mind these are of her being held up against my chest 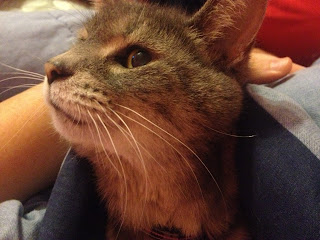 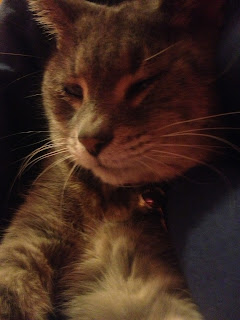 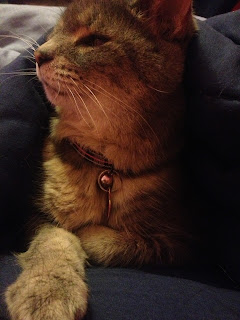 She should tide us over in the kid department for a few more years.

I have a deep love and appreciation for avocados.  I probably should considering I have one tattooed on my arm.  Because if I didn't love them....I guess that would make my tattoo silly now wouldn't it?

Let's just cross our fingers I never develop an allergy to them....cuz that would just be unfortunate

I'll take an avocado anyway I can get.  In a wrap or sandwich, chunked up in salsa, in deliciously fresh ceviche, eating it straight with a spoon and some salt, and of course everybody's favorite....guacamole!

Guacamole is pretty much good no matter what.....but I'm going to go all Emeril on you and kick it up a notch! 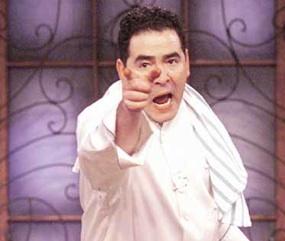 And that means adding cottage cheese to it.  Yes....you heard right....cottage cheese!  Don't go turning up your noise too quickly now.  It's CRAZY good!

The very first time I ever had it was at my sisters house when I was babysitting my (now 14 year old) niece.  She was probably 2 at the time so that would make me like...11.  Holy guacamole that was a long time ago!!

I remember it all so vividly it's actually kind of odd.  As she was leaving she told me  to help myself to whatever food was in the house and that she had just made a small bowl of guacamole if I wanted some.  Well....apparently I wanted some. At the time I wasn't even entirely sure what was in it but I couldn't stop shoveling it into my mouth.

I was doing that stupid thing where you're super addicted to it but are trying to convince yourself you won't eat that much.   I would eat a few chip fulls, recover it with the plastic wrap, put back in the fridge and go back to play with my niece.

Not even 5 minutes would go by before I was back in the kitchen for more....repeating the process.  After a few rounds of this I stopped wasting precious time and began scooping it straight from fridge.

Before I knew it I had almost devoured the entire bowl myself.  I was ridden with guilt and shame.  Sure anytime you do an kind of "sitting" whether it be baby, house, or pet, they always tell you to help yourself to whatever you want.  But your not actually supposed to eat it ALLLLL.  I was struck with panic and did the worst thing ever.  In an effort to not technically have eaten the bowl I left a few small spoonfuls in the bowl.

True story. I know....shameful.  I can only imagine what was going through their head when they found that near empty bowl in their fridge.

Fast forward....now I am an adult and can buy and make this for myself whenever I want.  AND I can eat the whole bowl and not feel bad.  I should probably make my dear seester a bowl sometime to make up for my transgressions over 12 years ago.  I'll put it on my to do list.  Let's just hope I can make it to her house before repeating the past

Enough about my gluttonous childhood...now for the recipe

Actually file this one as another NON recipe

Just make your guacamole the way you like it.  Mine includes jalepeno, garlic, chopped tomato, lemon, red onion, salt, and LOADS of lemon juice 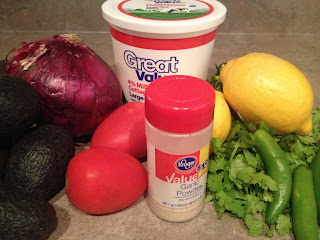 Then add some cottage cheese.  I like the full fat large curd kind....but that's just me 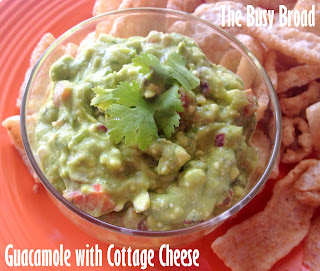 Seriously....you gotta try it!  It's a great party food just in time for football season.   Not only does it add some protein to your snacking but it also stretches your guacamole further for a crowd.  Win and win! 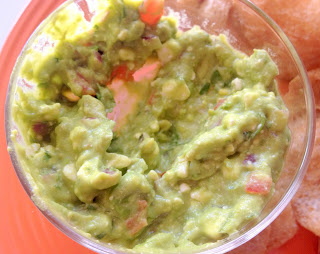 And since I watch my carbs I like to eat mine on chicharonnes....Or pork rinds in English ;) 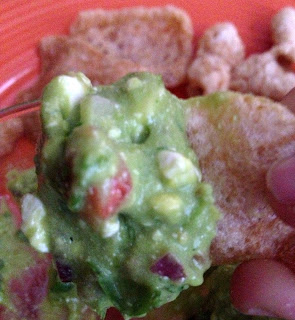 Give me a theme and I'll run with it as far as I can take it.  The last 2 years for my broski inlaws birthday I went with a peanut butter theme for his gifts.  I decided it was time to switch it up a bit and went with an ASU theme since he is a Sun Devil.  Actually all my brother inlaws and Sun Devils.  The Boy is the lone Wildcat in the family....but he holds his ground!

Originally the idea came to me because I thought I had heard him say he was going to make his garage ASU themed....so that's what got the ball rolling

His main gift was a trash can.  I know I know.....men don't exactly dream of getting trash cans as gifts....but I deliver them anyway

I traced it onto craft foam, cut it out 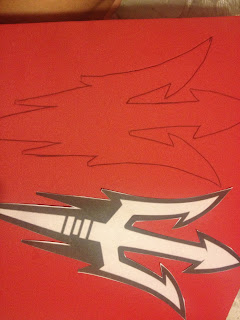 And hot glued it all onto the trash can 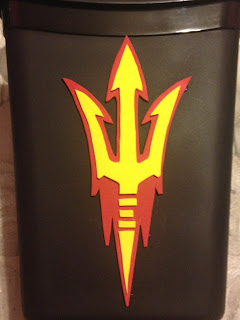 A custom trash can.....cuz everyone needs one 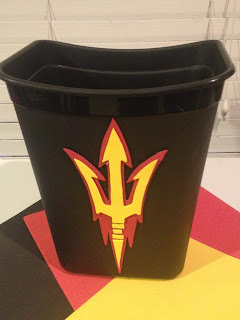 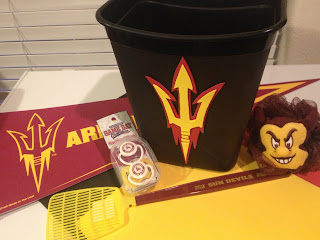 A poster, pennant, fly swatter, loofah, and my absolute favorite....binkies!  Not that I am trying to push anything.  But if he were to sperminate my sister I wouldn't mind.  Not at all

He seemed to like it all when he opened it.  And like I said I intended the trash can, poster, and pennant to be for his garage but I guess it all went up in the man cave.....whatever works!

These would make great gifts for all the men with man caves or garages in your life.  Christmas will be here before you know it and these would be easy to do

I've been a little MIA lately in the blogging world.  Like 13 days worth.  Which kinda makes me an el sucko blogger

But if you follow my blog at all...I'm sure you've heard me bitching about my job.  And I'm about to get whiny again....just a forewarning

My job has been on a steady downhill trend for just over a year.  But every time I think it's as bad as it could possibly get it just keeps getting worse.  Right now I'm at a crossroads...on the verge of a mental breakdown I'm sure.  My sister stated it perfectly in a text to our friend "We need to get Whitney out of there before we are visiting her in prison"

Like lay in bed all night thinking about it bad

Dreaming about it....or I guess that qualifies as a nightmare actually

Like I get nauseous thinking about it and can't eat

I'm losing weight (the one upside of all this nonsense)

And I'm getting terrible shit cramps over it

Imma thinking your job isn't supposed to make you physically ill.....or is that just wishful thinking on my end?

Anywho....here are some job related ecards that made me chuckle 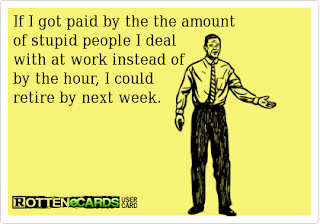 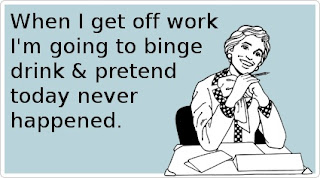 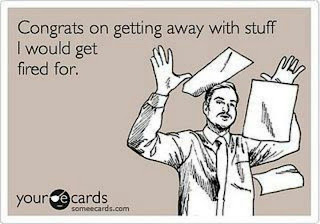 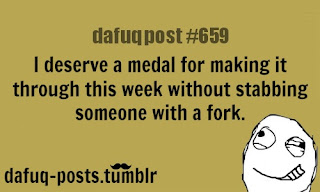 I'm serious too.  I have no shame in whoring out my skills on my blog  ;)


Anywho.....like I've stated before, with work being so rough I come home utterly exhausted at the end of the day.  And on top of that I was hired to do a kids birthday party so what little energy I did have at the end of the day went into party planning.  Now that the party is over I'm hoping I'll have a little more time to blog.   I make no promises though

Now back to our regularly scheduled programing .....

After 16 straight weeks of MoMo Mondays I missed my very first one last week.  I have to admit it really bummed me out.  I'm hoping it doesn't happen too often

When me and The Boy were dating I put in my time the entire first season.  I sat on the couch with him and watched every. single. game.  I can't do that now....it drives me CRAZY how often they stop the game.  It makes me itch.  Nothing lasts more than 10 seconds before they go to commercial AGAIN.  I hate it.

Lucky for me though, as I stepped out little MoMo stepped in.  She will sit with her daddy and watch football all day with him.  Here are the pictures to prove it 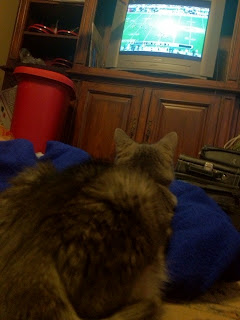 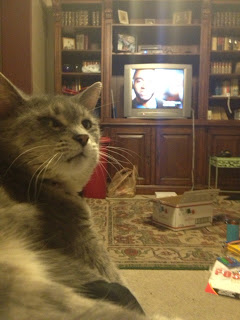 So I don't know about you....but I LOOOOVE Instagram!

Not only is it cool to follow your friends and family, but through the power of hashtags  you can see all sorts of cool stuff that relate to your interests

I love to browse through the lowcarb hashtags and learn from fellow low carbers.  It has opened my eyes to all sorts of knowledge, tips, tricks, recipes, and products.  One thing I kept seeing over and over were Quest bars.  People rave about them and I had been dying to give them a try.

If you don't know what Quest bars are, they're protein bars that are low in carbs, gluten free, and sweetened with erythritol. A much better alternative to other LC bars that use sugar alcohols....which can wreak havoc on your digestive system.  No bueno!

I had seen numerous posts of people baking the bars into cookies....so I had to get in on that action 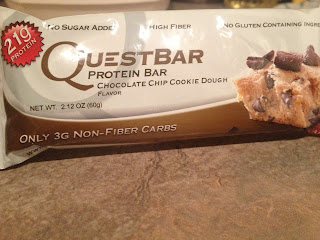 Microwaved it for about 10 seconds to soften it a bit and cut it into 8 equal parts. 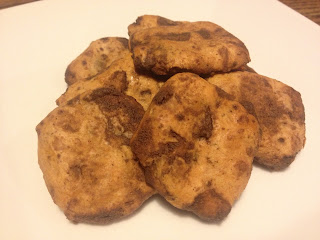 But I wanted to take it a step further. I used Breyer's Carb Smart ice cream to make them into mini ice cream sandwiches 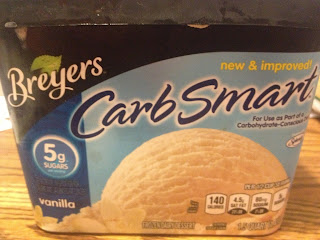 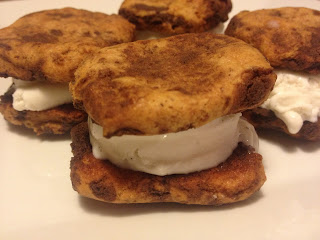 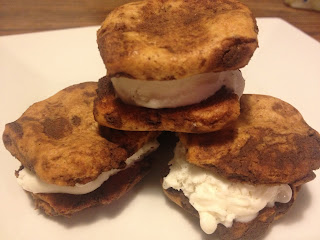 I ended up with 4 mini ones, but you could of course make one big one or even 2.  You will just have to adjust the baking time on the cookies accordingly

They make for a delicious little treat!  I can't wait to experiment with more of these bars

This week Kimbo from A Girl and a Glue Gun had a contest on Instagram.

You had to post a picture with a glue gun incorporated in some way.  This was my entry 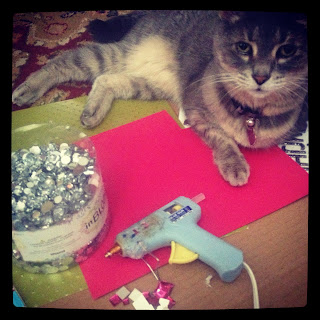 And my caption was:  Ummm....mama?  Please put down the glue gun and pay attention to me.

I was so sure nobody could resist her cute little face.....but I lost.

I demand a recount!