Growing up, Thanksgiving (and all major holidays actually) were spent at my grandparents on my dads side.  My grandma Helen was an AMAZING cook.  (doesn't everyone say that about their grandma though?)  She put a crazy amount of time into cooking weekly Sunday dinners for 30+ people from scratch, endless church events, and delivering people special meals for their birthday. She had shelves upon shelves on cookbooks and magazine clippings, and several deep freezers full of food. It was truly her biggest joy and hobby.

Grandma Helen had 5 kids, 4 boys and one girl.  Unfortunately, my one aunt did NOT inherit the cooking gene....,at all.  She cooked as little as possible and her offerings at family dinners were simple or store bought.  Despite her lack of cooking schools though, she had one dish that we all looked forward to every single Thanksgiving, her 12 layer jello.  Thanksgiving just wouldn't be the same without it!

Fast forward some years later and actually having cut ties with my dad and subsequently that whole side of the family (makes this whole post sound a little more awkward now doesn't it? lol) I decided that I wanted to make it myself for the nostalgia factor.

Welp, it was a hit, especially with my niece Elsa.  Now every year she asks "are you making the SPECIAL jello!?!?"  How could I not? 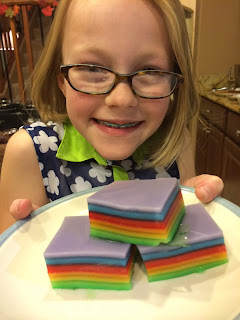 So here's the thing about the jello, it's not hard to make,  Jello almost never is.  It just takes time and patience.  I suggest carving out a minimum of 3 hours of your time to getting it done. If you did one layer every 15 minutes you can get it done in that time.  15 minutes between layers is almost always the perfect amount of time for me.  You can't have it be less or the previous layer might not be set enough and then you risk mangling or having them bleed together.  Too firm and then the layers won't "stick" to each other enough and they are more likely to peel apart when you go to slice and serve it.

What we're looking for is mostly set but not super firm.  Know what I mean? As long as you get that part right, the rest of the process is just mixing and pouring. 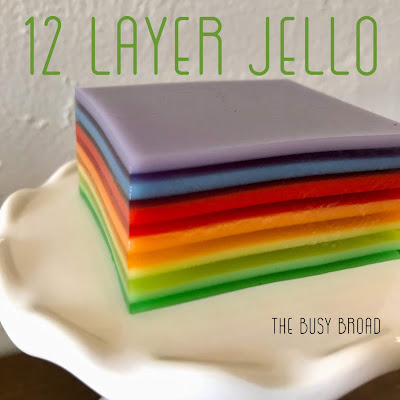 
Starting with the lime and working your way to grape last, dissolve the jello in 1 cup of very  hot water.

Pour 1/2 cup of the jello into a 9x13 pan, tilting as needed to ensure the entire pan is coated.

While that layer sets, mix the other 1/2 cup of jello with 1/3 cup of vanilla yogurt.

After about 15  minutes, check the the previous layer by lightly touching it with your finger.  You want to leave a light fingerprint in it but not have it stick to your finger.  Set, but not overly firm. Once it is properly set, pour the yogurt and jello mix over top, tilting to evenly coat as needed.

Repeat this process for all the flavors. Each flavor will have one regular layer and one cream layer.

Thanksgiving Shows & Movies Round Up

I've brought this topic up several times over the years, how Thanksgiving gets the shaft in the holiday season. This meme sums it up perfectly. 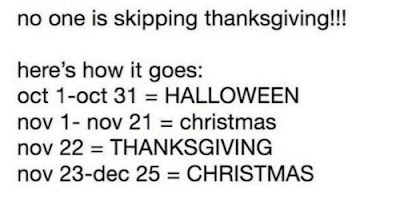 Don't get it twisted...I'm a Christmas fanatic. But I also feel strongly about giving Thanksgiving it's time to shine too.

I think part of the reason it gets overlooked is people don't see it as something past a one day celebration. One way I think you can start looking at it as a "season" is through finding other ways to celebrate it.

While I completely understand that it will most likely never be on the same level as Christmas, we can do better!

Christmas gets a full month of movies and TV shows dedicated to it....why not Thanksgiving?

Below are a list of some of my personal favorite Thanksgiving shows and movies that I love to watch in the week or some leading up to the big day. 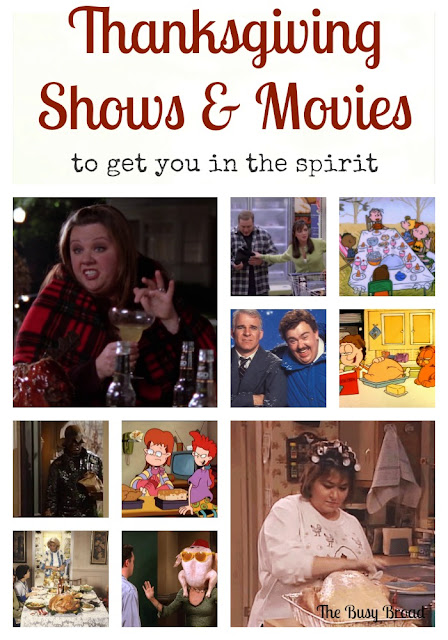 I knew I had to put Friends at the top of the list.  Besides a questionable episode in season 2, it has a Thanksgiving episode for every season it was on air.  From potatoes 3 ways, Chandler losing a toe, and a trifle made with beef and onions....there's a plethora of Thanksgiving feels to be had. 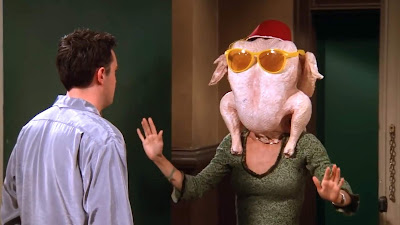 There are several Thanksgiving episodes to choose from over the course of Roseanne.  Usually they come with some big revelation, like how Roseanne and Jackie's dad has been cheating on their mom for years and is spending the holiday with his girlfriend, Jackie becomes a cop, Roseanne was conceived out of wedlock, and Bev even comes out as a lesbian.  The first two episodes listed are BY FAR my favorites, but all are worth giving a watch for the sake of Thanksgiving spirit. (On second thought....the last two are pretty bad, you can totally skip them)    The thing I appreciate about these episodes (and actually the show as a whole) is they give a somewhat realistic view of the average family at the holidays.  The ever changing family dynamic and drama,  and the struggle to pull it all together for the sake of family and tradition. Blue collar humor at it's best.

Hopefully some fellow 90s kids out there appreciate this as much as I do.  Pepper Ann is a gem of a cartoon that is often overlooked and underrated but goes down as one of my favorite kid shows of all time.  In this episode Pepper Ann's mom and neurotic aunt attempt to redeem themselves after a disastrous Thanksgiving past that is even more humorous now as adult. The main plot centers around Pepper Ann and Moose awaiting a surprise from their dad which of course results in plenty of day dreaming by our favorite 7th grader. I have to give the writers kudos for always doing such a good job of portraying divorce so well for a kids show...which wasn't too common back in those days. 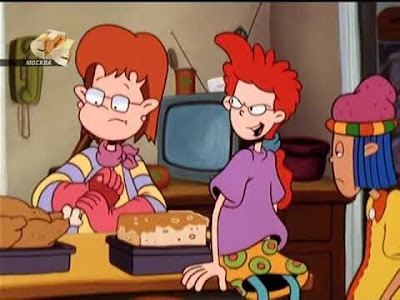 I honestly can't remember how I first discovered Mama's Family as a kid, but however it happened I'm sure glad it did.  I could only watch it during summer break because it only aired at 1AM on CW.  I would nap in the afternoon just to make sure I would make it to through it's entire 2 hour window.

The Thanksgiving episode centers around a Tornado, a broken gravy boat, and rum balls. Thelma, Bubba, Iola, and the whole gang are a perfect addition to your Thanksgiving list of shows. 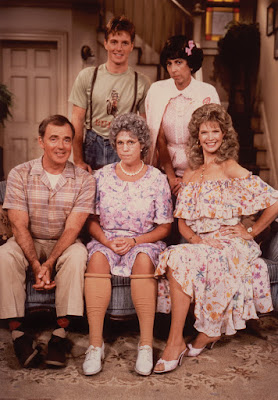 I have watched this episode every year without fail for at least 5 years.  The running gag throughout the episode is that Cliff is sent out in the rain to buy some missing ingredients.  Between forgetting some things and other disasters, it turns into several trips.  The main plot of the episode revolves around Denise inviting Paula (Olivia's bio mom) to dinner while she is in town for a layover.  As a kid I thought Lisa Bonnet was the most gorgeous woman ever so I liked that there was a holiday episode focused on her character. 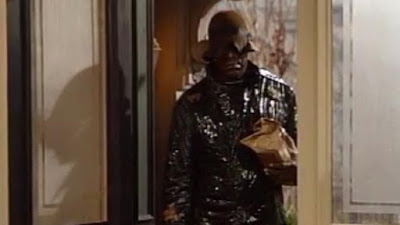 Let's just start off by acknowledging that anything starring Steve Martin and John Candy is bound to be good....and this movie does not disappoint! It's pretty much everything we love about 80s comedies with a hint of holiday. Ad exec Neal (Steve Martin) is trying to get home to his family for the holidays but a giant blizzard hits.  He ends up begrudgingly teaming up with Del (John Candy) to try and make their way home anyway possible.  They're polar opposites, hilarity ensues, and it ends with a little tug at the heart strings.  Just what you want out of a holiday comedy. 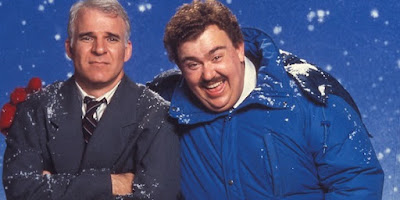 I had to hit you with an obvious classic.  What's thanksgiving without watching Snoopy and Charlie Brown put together a feast of popcorn, toast, and jelly beans? Like usual, Peppermint Patty is a rude and entitled bitch, but considering it's pivotal to the story line so I will sort of set aside that rant for the time being. 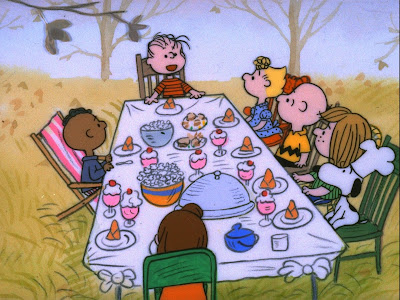 Those crazy Gilmore Girls committed themselves to four different thanksgiving gatherings.  Between Richard and Emily's, Sookie, Luke, and the Kim's they are running all over town trying to see everyone.  While entertaining enough on it's own, the real star of this episode is Sookie,  For the very first time she has relinquished control of cooking dinner and let Jackson and his friends take the reigns.  She is horrified that they are deep frying it and as a result gets more and more drunk on margaritas to cope. Oh! AND Kirk gets a cat. It's an episode not to be missed! 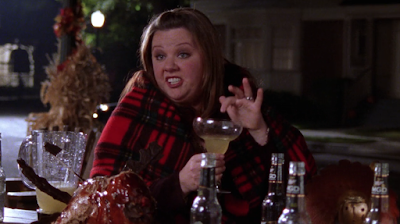 The Wonder Years- The Ties that Bind S4E7

This episode doesn't provide a ton of comedic relief (any, really) but it's a good episode.  One of the reasons I love The Wonder Years so much is because it goes a step further than the typical "coming of age" series by really being able to dive into the growth and lessons through the commentary of adult Kevin.  In this episode, Jack has recently taken a new job that requires him to travel.  He gets stuck and can't make it home in time for Thanksgiving dinner.  Kevin watches closely as his mom tries (in typical 60s wife fashion) to put on a smile and cook and serve dinner as normal for the rest of the family even though he can sense she is deeply disappointed.  I won't go into all the details but Kevin comes to the realization for the first time that they are more than just "mom and dad."  They are also Jack and Norma, a couple first and foremost. 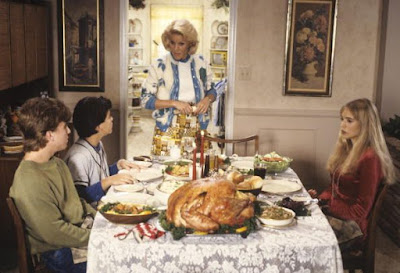 Coming at you with a lesser known Thanksgiving cartoon.  Garfield is taken to the vet the day before Thanksgiving and to his horror is put on a diet! Jon has the hots for the vet and invites her to Thanksgiving dinner for a date. She's uninterested and cold but agrees to it anyway. Jon can't cook, Garfield is crankier than normal due to his diet, and you can pretty much guess how the rest of it goes.  But in case you can't....it's not a bad way to spend 20 minutes and give it a watch. 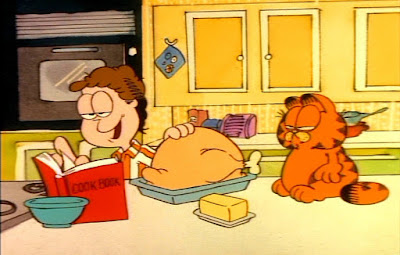 Ahhh King of Queens. Another show I love that seems to be overshadowed and underrated. I love the Heffernans and Arthur is the perfect unruly sidekick that every show needs.  In this episode, they go shopping for dinner the day before.  Carrie planned to just pick up prepared meals but Arthur guilts her into making a meal from scratch for the first time. 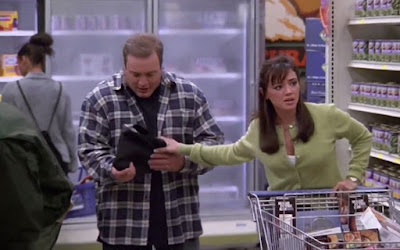 Well, there ya have it! Will you give shining the light on Thanksgiving a shot this year?
Posted by Whit at 12:40 PM No comments: