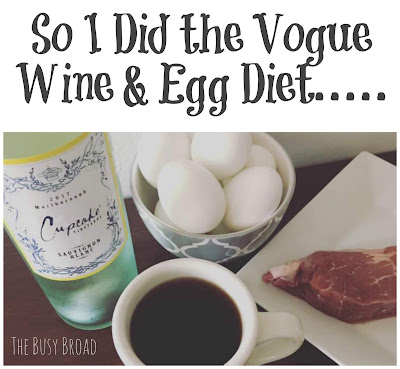 Last Thursday I was scrolling through Facebook
book as I do faaaar too much, and came across this diet that was posted in Vogue back in the1977

The diet itself is actually from a book written by Helen Gurley Brown in 1962 titled "Sex and the Single Girl".  According to Wikipedia (yes, we here at The Busy Broad do extensive research and fact checking before publishing) the book was "written as an advice book that encouraged women to become financially independent and experience sexual relationships before or without marriage." By 1964 the book was adapted into film.

Helen went on to write several other progressive books for women and later become the editor in chief for Cosmopolitan  for 32 years.

Okay okay.....enough of the history lesson....back to eggs and wine!

So I discovered this on Thursday night and by Friday evening I was loading bottles of wine and steak into my shopping cart.  I figured, what better way to understand the women who came before me than to partake in the crash diet of their time.  It's how we bring the generations together damn it!  We can all only hope that someday our great grandaughters will be filling their carts with cayenne pepper, maple syrup, and lemons.

(This is in reference to the Master Cleanse for those that need a little help......I never actually did it myself but it was alllllll the rage a few years ago)

Saturday Morning I made the announcement that I was taking the plunge!! 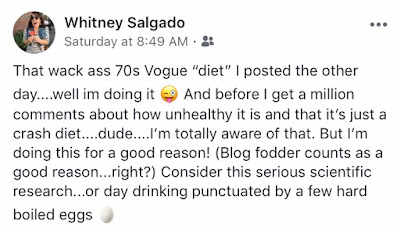 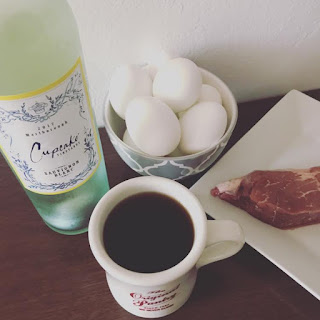 
Considering the general lack of food in the "diet", I thought it best to sort of combine it with half assed form of intermittent fasting (which I have done successfully in the past) to make it a bit easier on myself.  I find it much, MUCH easier to abstain from eating in the morning than at night, so even though I was up at 5:45. I didn't end up having my first round of coffee, egg, and wine until about 10:30.

Let me tell ya.....It's kind of a fucked up combination.  Coffee....then straight to wine? Yeesh! Between the straight caffeine of the coffee combined with the extreme temperature difference of the hot coffee and chilled wine.....oh my.  Tsunami tummy was in full effect.

I sat on the toilet and thought.... "This. THIS is how you lose weight on this diet"  You shit your brains out.  Plain and simple.

But don't get me wrong.....I'm not opposed to a good bout of diarrhea.  No siree bob!  In fact, I welcome it on (most) occassions.  For many years I've suffered from the exact opposite bowel condition, so a case of the Hershey squirts leaves me feeling a bit lighter, sqeaky clean on the inside, and with a smile plastered on my face as I flip on the fart fan and make my way out my bathroom door (and ONLY my own bathroom door...I can't do the doo anywhere else, hence some of my issues)

After some quality time with John, I waited 3 more hours before I had more coffee, TWO eggs, and TWO glasses of wine.  (I know what you're thinking.....how gluttonous of me!)
It was...whatevs.  Not too much you can say about it.

Another 3-4 hours later I had my dinner.  I skipped the coffee (disqualify me now!) and just had my steak with lemon and the last of the bottle of wine (which is another 2 glasses)

I went to bed that night really wanting a crispy chicken sandwich.  Just thought you would want to know that in case this type of side effect is worrisome to you.  After all,  I did do this for YOU.....my readers, my people.

Day 2 was basically the same shit as Day 1.....minus the shit.  There was none of that.  It makes sense though.  After the purge the day before I don't think there was much else to be rid of except my steak from dinner and that decided to just camp out a bit.

I was a bit more preoccupied with the idea of just WANTING to eat on Day 2, but overall still felt ok physically.  No major complaints besides the fact that it's boring.  I just used it as an opportunity to try and focus on other projects rather than what to eat.  I will say, once you kind of push aside the crappy parts of it, sometimes a super restrictive diet can be nice for a short period of time. Yet another reason why I enjoy intermittent fasting and even Whole 30.  Clear cut rules while hard can actually end up making things easier on you (hard but easy....kinda confusing, I know).  It's a simple yes or no rather than trying to weigh out the responsible decision in the moment....know what I mean?

Anywho....Day 2 plugged along as it should.

So this diet is supposed to last 3 days, but I only got to do it for 2...because work.  I think nursing a bottle of wine over the course of your work day MIGHT be frowned upon when youre employed by a school district, but I'm not too sure.  Maybe I'll check the employee handbook for clarification.

The diet claims you'll lose 5lbs in 3 days.  In the 2 days I was able to do it, I lost 3lbs on the nose, which is just shy of the 3.33 it would roughly be with the 5lbs evenly spread over the 3 days.
That pretty much puts me right on a middle line.  Maybe I would have lost the full 5, maybe not. We will never quite know....and we're all just going to have to live wit that.

If the idea of being on a "diet" that requires you to drink alcohol sounds fun.....you might be wrong. It really wasn't as fun as it sounds.  You're drinking the wine in such small amounts over the course of the day that it's not enough to even to catch a buzz.  At least not me.  A lightweight might....but 2 glasses just doesn't do it for me and if I'm going to drink I want to at least get some fun out of it!
It might also be because I'm not a huge wine drinker.  I like it just fine, but its not my first choice.
Now maybe if I got to swap out the glasses of wine for shots of tequila I might like it a little more. (hmmm.....second blog post idea??)

Overall, I was glad I did it just for the sake of doing it but it didn't make any huge impressions on me both good or bad....and I lived to blog about it!

Will you give the Vogue diet a try?  If you do, come back and comment back here with your experience.  I'd love to hear it!

No, we didn’t just travel back in time.  We are indeed in October 2018 and this is a NEW Wardrobe Wednesday post!

I quit doing it for several reasons.  In general blogging took a back seat while I was going through some personal stuff that following year. Then, even when I was ready to start blogging again I put immense pressure on myself that kept me from getting back on the horse so to speak. And lastly........I totally got fat..... AGAIN.  Ugh!

The bulk of my WW posts were done during one of the thinnest points in my life, so I had enough confidence to do them (not saying I was super confident, but it was enough).  But with each pound and chin I gained I just didn’t feel comfortable doing it anymore.  I’m still faaaaaaaar from my goal and feeling chubby even today.  I look at these pictures and still pick apart the details and lumps, but I decided to go ahead and do it anyway.  Maybe it will help me...who knows?

Also, to alleviate some of the pressure I put on myself, I’m not going to necessarily make it a weekly thing like it was before.  Sometimes it gets to be too much, so I will just be posting them as I am able to and not stress myself out over taking a picture every week while the light is good, my hair isn’t too flat yet, my sisters is around to take the picture with the right angles, and before I eat dinner Hahahaha.   I’m just going to roll with it and see how it goes. 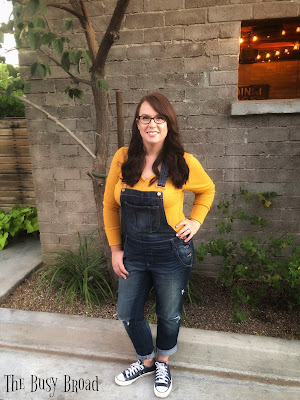 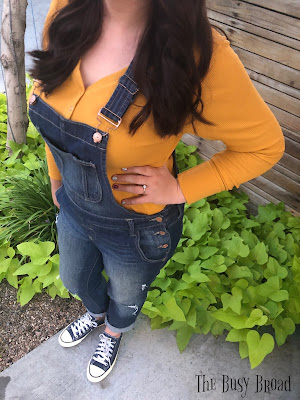 I’ve seriously gotten sooooo many compliments on these overalls and people are always shocked when I tell them they came from Wally World.  They are from 2 seasons ago and I got them for $12.  I cut the knees and distressed them myself because I felt like the needed a little something to break up all the denim. I haven’t noticed if they have them in stock this year or not, but basically the lesson here is don’t completely dismiss Walmart as a clothing option.  You can find some good stuff!

The yellow thermal is currently in stores from their Time & Tru line.  I got it for $7.96 and LOVE it!!!  It’s super comfy and basic enough that it will be perfect for mixing and matching with a ton of outfits all season long.
Overall this outfit was super comfy and casual but I still looked relatively put together....which is my favorite outfit formula!
Thanks for reading my dive back into Wardrobe Wednesday!
Posted by Whit at 5:54 PM No comments: