I made this tuna pasta salad last night for 2 reasons:

Welp, we’re kinda in the process of buying a house and it’s terrifying and lot of money and really overwhelming and I’m scared to talk about it and I haven’t talked about it much except for the people directly around me because I’m afraid I’ll jinx it and at any point the whole thing will fall through and all my hopes and dreams will come crashing down and I’ll slip deep into the depths of despair so Imma just lay low about it until its all over and official

That entire paragraph is written in a frantic run on sentence because that is a perfect representation of my mind right now.  Frantic and always running…….

Let’s just move on from that right now and talk about something else....like not spending money.  Yea....let’s do that.

So in the spirit of saving, The Boy and I have agreed to a series of cutbacks for the time being.  We cancelled our Playstation Vue, we’re giving up alcohol and other unnecessary drink, no K cups for the Keurig, no eating out, and Mildred (the cat) has agreed to giving up her Sheba sticks (couldn’t get her to budge on the Temptations treats but we will be rationing them out).  Just to name a few, but there’s a ton more.  Lots of little things that add up.

Because of this I am paying close attention to our grocery bill and quickly realizing how much I was over spending.  Whether it be overstocking and buying, letting produce go to waste, or not looking for the best deals possible.  I went a week and a half where I didn’t have to buy groceries at all, and this week I only spent $24 on a few fresh items.  The goal is to eat from the pantry and freezer as much possible.  Not only will it save us money, but we also won’t have to move as much (stop talking about it Whitney!) and can start over with pretty close to a clean slate.  With that will come some more interesting meals and the consumption of a few more carbs than normal....but it is what it is for now.

After I took inventory of everything we had, I knew tuna pasta salad was a must.  I mentioned it to The Boy thinking he’d be all “ehhh” about it and he said “Oh yea! That sounds good!” And he chose it for dinner the next night.  Considering it’s the epitome of white people food, I was a little surprised at his response.  I guess all my casseroles are rubbing off on him…… 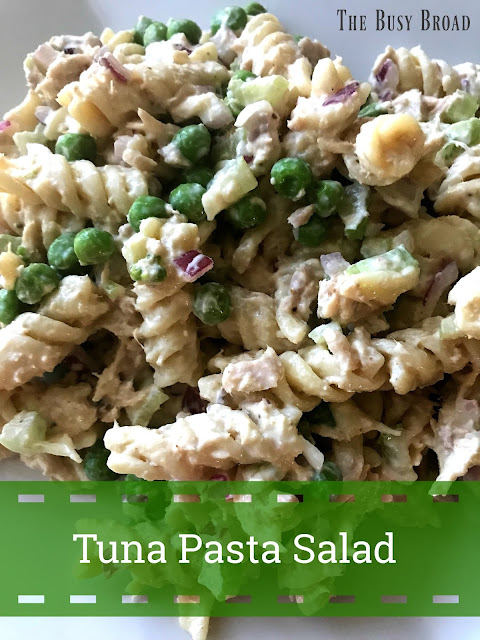 Cook pasta to al dente and let cool.  Mix all ingredients together and chill for at least an hour before serving.

More #Whitepeoplefood if that’s your thing