A Guide to (some) Food in California Adventure

I'm not claiming to be an expert about the California Adventure food......because I'm certainly not

And partly because EVERY time I go.....it's all different! 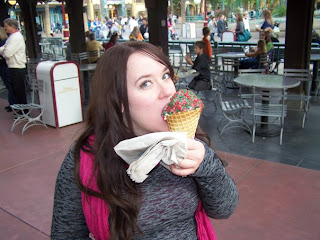 Went back a year later....gone! (But I'm wondering now if the Paradise Pier ice cream is the same? I'll just have to find out!)

The park is changing CONSTANTLY.....and deifnitely for the better.....it's really starting to grow into something awesome

This last trip we stayed the entire day.....thanks to Cars Land!

But because of all this we haven't been able to have an standard favorite snacks that we always eat on every trip....but that comes with time and hopefully we're finding some now

When Cars Land opened this past summer The Boy and I were constantly reading reviews and articles, watching Youtube videos.....gathering info all around. We're nerds like that

The first thing we got was the pretzel bites.....I had a hankering for cheese sauce that day 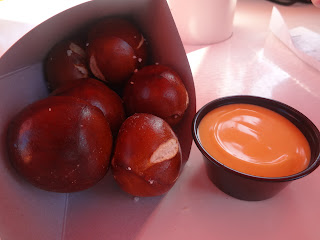 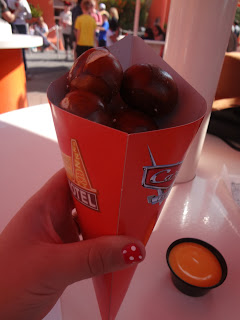 And they were pretty much what you would expect....pretzely....salty....and cheesy.  You got a decent amount for $4.99

I was sad to reach the bottom 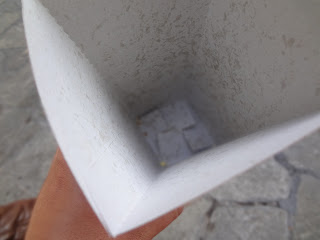 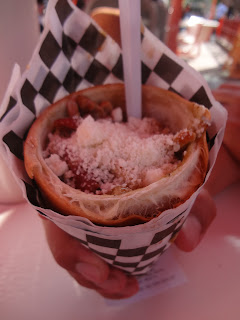 Perfect amount of green chile spice and the bread that the cone is made of is delicious!  It's like cresecent dough because of its flakiness but it tastes even better 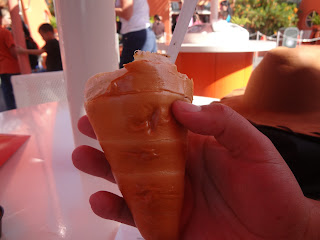 And last but not least over in the Cozy Cone area......was the Cone Drink cup!

Let me tell you....I was SOOOOO excited get one of these cones ever since I laid eyes on them through Youtube videos

It may seem a little steep for soda, but I had been dreaming of walking around the park sipping on a my traffic cone for 5 months and damn it I just had to have it! 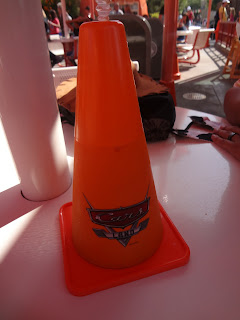 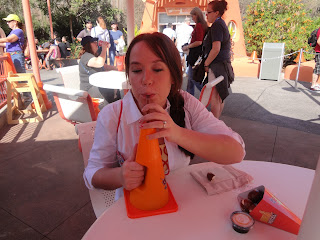 And after we finished the soda we would fill it up with water at drinking fountains....so it served us well the whole day

Here is a slightly embarassing picture of me back in our hotel room....but it shows how pumped I was about this freakin cone

The Boy made me a vodka cranberry and I propped myself up in bed, watched SNL and sipped on my cone until I fell asleep 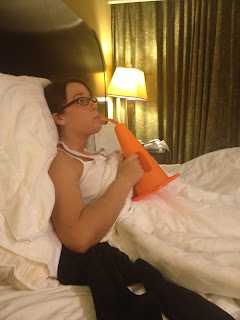 I know........ I look like a hot mess.....and trashy as shit......but 5 months of my life was leading up to this moment and I wasn't about to let my day end without another round of cone action

It was described as:  Roasted vegetables, cauliflower, Bulgur wheat, soy crumbles, and smashed red skin potatoes, topped with cheddar cheese. Served with a choice of one side and a garlic chive roll

Obviously this was more aimed toward vegetarians, but The Boy and I love roasted vegetables so  much and it was different from anything else we had ever seen in the parks so we decided to give it a go 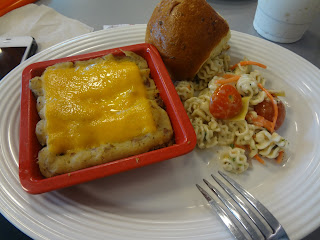 We chose the pasta salad as our side but you could also have roasted corn medley, vegetarian baked beans, peas and carrots, cole slaw, or mashed potatoes.

Now here's the deal....I REALLY REALLY wanted to love it.....I really did.  But I came away just sorta liking it

I love the idea of the dish but it just didn't quite live up to what I had hoped for.  The vegetables were a little more of a mush than I wanted....I was hoping the roasted vegetables would have more texture  And while it tasted good and certainly not bad....it was just ok.

The pasta salad and roll were good sides.....but I also think my main issue with it was the portion size for $10.49

The entree itself seemed small for that price, especially in comparison the other peoples dishes I saw that got meats

Maybe we would have been better off trying the citrus turkey breast plate, the NY strip, or the pork loin with Coca Cola BBQ sauce. 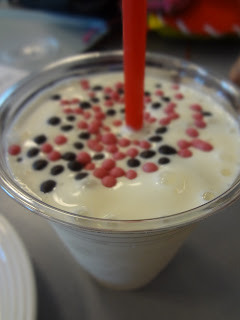 We got a classic Vanilla.  All the shakes are topped with "gravel"  AKA crunchy candy yummies

I really liked the added crunch.  It was a good shake and only $3.99 without the souvenir glass

At the end of the night we decided to get something for dinner while we staked out spots for World of Color.

We both made eyes at each other and we both knew what that meant......corn dogs! No words necessary 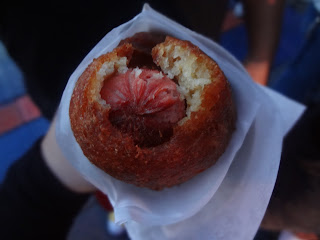 They actually have more options at Castle Dogs than the corn dog cart in Disneyland.  In addtion to just the plain corn dog you can get a cheddar dog or a hot link corn dog.

Those are most definitely on my list of things to try on my next trip...mmmmmmmmm.....hot link....

The only other words of advice I can give you is to not ever bother eating at Award Wieners over in the Hollywood backlot area, across from Live On Stage. Well....of course you can certainly do whatever the hell you want.  Who the hell am I to stop you?

But we only ate there once on our very first trip and it wasn't very memorable.  The prices were about the same as the corn dog prices (also includes chips or apples) but it just didn't seem like as good of a value.

I remember the hot dogs seeming kind of small and finishing it in about 2 minutes tops and still feeling hungry.  They didn't taste all that good either.  Nothing to write home about.  Not at all like how the corn dog fills you up and not to mention are un-effin-believable

So save yourself the disappointment and walk your happy ass across the park to Castle Dogs...you won't regret it!

Email ThisBlogThis!Share to TwitterShare to FacebookShare to Pinterest
Labels: Disney