The BEST Stuffing Ever

Stuffing really is a funny concept when you think about it.  You take bread that was once at the perfect moisture content and dry it out, only to sog it up and then put it in the oven to partially dry it up again.

Like I wonder who thought “MMMmmmm” I bet soggy bread is DELICIOUS!!!  But right they were and I will forever be in debt to them for their contribution to this world.  Stuffing is hands down my FAVORITE part of Thanksgiving.  I could do without turkey, pumpkin pie…..those are just fillers in my world.  That soggy bread takes center stage!

Luckily….I also happen to make the best damn stuffing out there!  Now normally I’m not one to be super cocky….but when ya got it ya got it…right? 💁  And man does this recipe got it!
I spent 10 years just throwing it together always meaning to measure and actually “write” a recipe of what I was doing and finally wrote it down just last year.  Just in time too because I’ve gotten 3 requests just this week to share it. 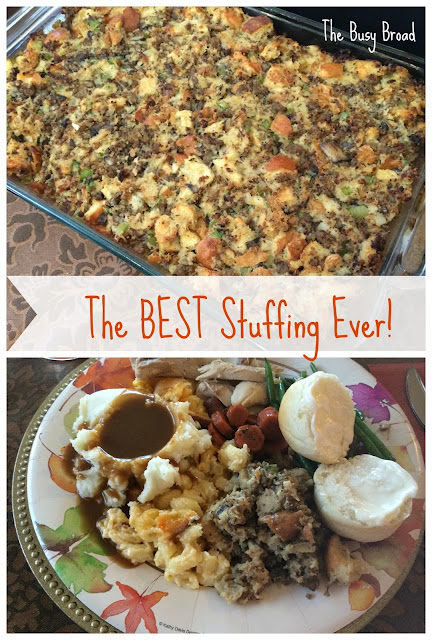 So what makes it so dang good?

Well first, start with a good bread.  Something soft but not too soft, chewy, but not too chewy.  (Sounding a little Goldilocks right?)  Basically, you don’t want mushy Wonderbread and you don’t want the bread that’s so chewy you have to rip into it like an animal.  My perfect in between bread that is also cheap and accessible is the Italian loaves from the Walmart Bakery.  Bonus points too if it’s the herb loaves!

The next key point is the sage sausage.  I love the flavor that the sausage adds and by using the sage variety you really give it that Thanksgiving taste.  You crumble and brown it as finely as you can and then keep all the glorious fat.  That’s right, not draining the fat here….it’s vital to the final outcome!

Next up, butter.  Did you think that the sausage drippings was enough fatty goodness?  Well it’s not!  Now you melt in some butter.  Don’t be disgusted….just trust the process……

Mushrooms.  Yep, there’s mushrooms in it.  You might be tempted to leave them out, but I really think you should keep them in.  They’re chopped up finely so even all the so called mushroom haters in my family still adore this stuffing.  Being chopped up fine they blend well into the whole mix without biting into any big chunks.  They just impart a great texture and flavor that I think would really be missed.

There’s obviously more in the recipe (as you’ll see below), but these are the ingredients that I think really make it.   One thing I didn’t do when I was writing this all down last year was the actual bake time.  You’re going to have to kind of navigate that one for yourself.  I usually bake it covered with foil at 350-375 for at least 25 mins before I uncover it and bake it longer until some of the top and edges are crispy and it has dried out a bit.  You can bake it to whatever moisture point you like it.  Just start checking it after 20 mins to see where you are at.   Think you can handle that? Hope so…..cuz you don’t want to miss out on this pan full of delish.

The BEST Stuffing Ever

Lay bread cubes in a single layer on a baking sheet and bake in a 300 oven until dry.

Brown and finely crumble the sausage. DO NOT DRAIN THE FAT.  Lower the heat to medium and add the butter and melt.  Add in the onion, celery, and mushrooms and sweat until the veggies are translucent.  Stir in the thyme leaves and salt.

Pour in bread cubes and toss the bread around to coat in the fat as evenly as possible.  Add the broth and stir until all the bread is moistened.

Spread the bread mixture into a buttered baking dish and cover with foil.  Bake in a 350 oven for at least 25 minutes, checking to see how moist the bread is still.  Bake uncovered an additional 10-15 minutes or until you stuffing reaches your desired amount of brown and crispy on top and is as dry or moist as you prefer.