So last year I made...not so much a wreath....but a door decoration for Cinco De Mayo.  As soon as I made it I liked it, but I didn't love it. It just wasn't quite what I had in mind  You can go see it HERE

Sooo....when April rolled around this year I pulled it out and decided I didn't want to put it up again and pulled the maracas off of it.  Bad idea. Baaaaad.  This ripped something else on it so the option of just reattaching them if I wanted to was out the window.

But I thought...No biggie....I have the whole month of April to make a new one.

Well....life happened.  Between taxes, a friends wedding (which was multiple projects in itself), other projects, maintaining a house, oh yea....and the little thing I call a full time job......it didn't happen.

By the end of last week I was starting to stress over not having one made yet.  It was literally hard for me to go to bed at night because I kept thinking I should be making a Cinco wreath right NOW!!!

So then the semi logical part of me kicked in and said  "Hey Whit.....stop stressing.  Nobody will care if a holiday comes and goes and you never put up a wreath...nobody will even notice" I chose to listen to that moment of logic and thought I had come to peace with the idea of just skipping it this year.

Monday my sister Kinsey came over...and whataya know.....one of the first things out of her mouth was "There's no wreath on the door?!?"

Welp....so much for logic and "nobody will even notice"......buncha bullshit!

So I frantically made one the other night....and guess what....I still don't love it.  So I'm sure I'll be back in this same position next year

Normally I love all my wreaths, but I think Cinco De Mayo decorations have such slim pickins that I just can't seem to get anything I love.  I still have an image in my head for what I want....I guess I have a year to make the PERFECT Cino wreath

I guess this one will have to do in the meantime

All I did was glue on my usual wreath background of shreddy paper.  I used red, green, and white.   Then glued on my maracas (which I'm sure will somehow end up in the next one too)  And then some of these paper fans I made.....Here's what I did 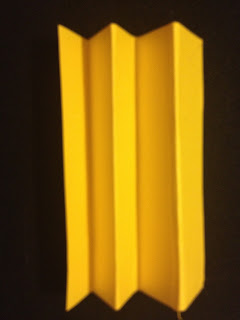 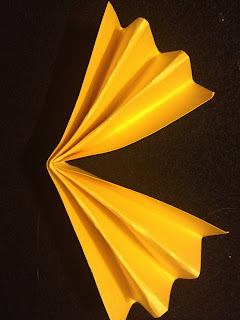 Glue or staple the two middle sides that come up to make your fan shape.  Repeat this with the other 2 squares, the glue or staple all 3 together to create one large circle fan 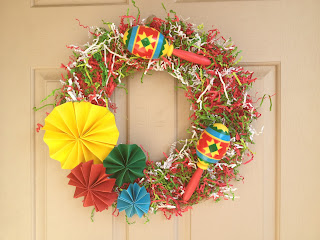