I looooove sushi!  It's like crack.  If this pyramid of sushi and the $150 price tag doesn't prove that then nothing will 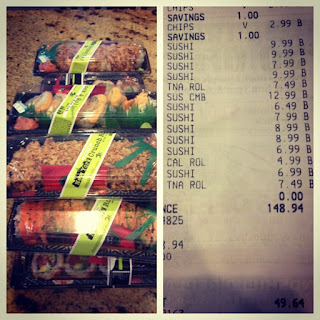 (For the record though....this was for a girls weekend so I didn't eat it all myelf.  But....give me 3 days alone with this stuff and I'm sure I could have)

But considering that eating white rice is basically the same as shoveling sugar into your face, sushi has now become a rare treat for me...and oh how I miss it so!

That's why I was so thrilled when I came across a pin on Pinterest that showed rolls made with cauliflower rice instead of sticky rice.....flippin genius!!!

Why didn't I think if this??  I mean I already make cauliflower mexican rice and fried rice....why did this idea never enter my little brain?

I googled a bunch of different low carb sushi rolls and somewhere on a message board I remember someone suggesting that you mix a little cream cheese into the cauliflower rice to make it more sticky.....again with the genius thoughts!  I'm convinced that low carbers are some of the smartest people around ;)  I wish I could remember where I read that....but thank you to that smart person somewhere out there in the cyber world

Here's what I did

First I shredded a head of cauliflower in my food processor.  I really prefer the way it comes out in the processor as opposed to hand grating it

While it's still hot, stir in some cream cheese until it starts to stick together more 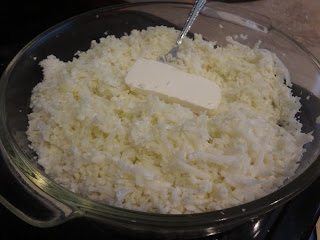 If I had to guess I think I used between 1 and 2 oz of cream cheese...but just do it until it feels like it's started to bind it together slightly.  You don't want to go overboard with it and have the cream cheese flavor be overpowering

Here it is all mixed through.  See the difference in textures and how it looks more clumped together? 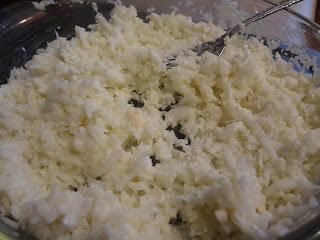 Put it in pan and let it sit in the fridge to cool down.  A larger pan with more surface area will make it go faster.  I left it in for an hour but I'm sure it was probably cool enough sooner

Then you're all set fr sushi makin!

Spread your cauliflower rice on the nori just as you would the sticky rice, leaving an inch on one side 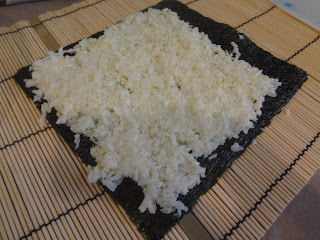 And add your fillings

First filling I made was spicy crab 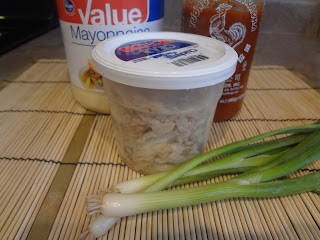 If you're eating low carb you have to fork over the extra cash to get real crab meat for this.  No imitation.  Real crab has virtually no carbs but the imitation is loaded with sugar.  That's because crab has a naturally sweet flavor and in order to mimic that the imitation takes a white fish if some kind and adds sugar....and still doesn't taste even remotely the same haha.  Plus it just tastes better than the fake stuff anyway.

To make your spicy crab add mayo and sriracha to taste.  I like mine extra spicy.  I also added a little chopped green onion to the mix 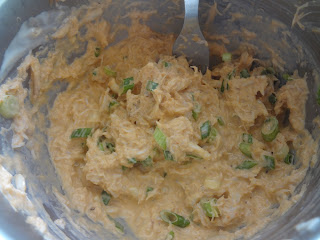 Put on top of your cauliflower rice and start rolling 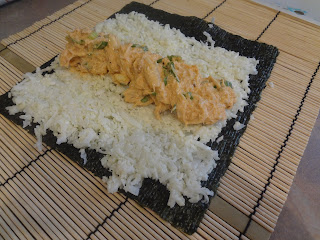 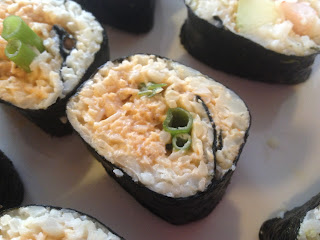 Next up....ahi tuna.  With cucumber, green onion, and avocado 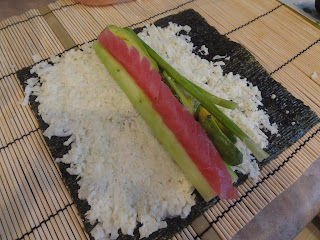 That's it in the middle 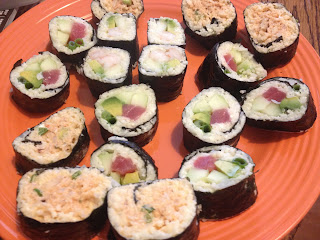 And some shrimp sushi.  Again with avocado, cucumber, green onion, and sriracha because I just can't stay away from the stuff 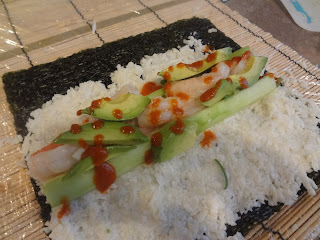 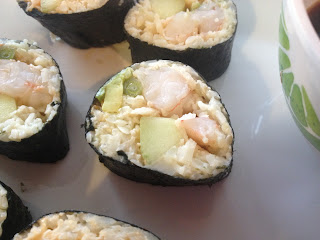 And last but not least....spicy tuna!

To make that all you do is fine chop your tuna 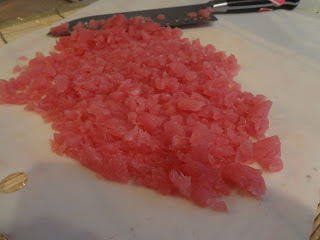 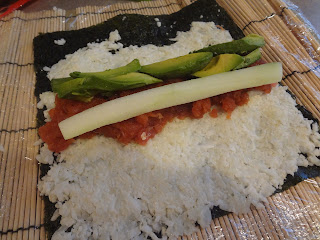 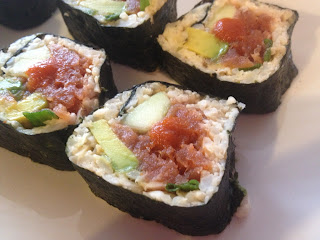 Once you know how to make the rice...you can put together whatever flavor combinations you want

I have a feeling I'll be making this alot now 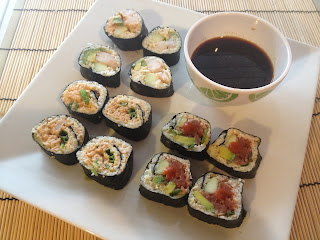 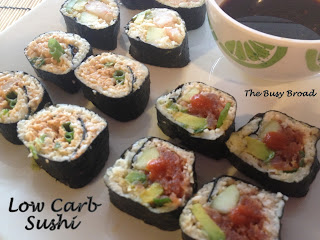