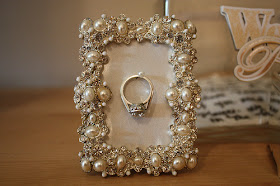 Why the heck didn't I think of this? The idea is so simple but soooo genius at the same time!

When I went to the source I realized it was a store bought frame from Kohls.  I knew I could probably find a similar frame if I looked hard enough, but being the project loving gal I am I decided to tackle this one myself

I got a small wood frame and painted it white.  I completely forgot to take a "Before" shot of the frame but I'm sure you can use your imagination to picture a plain old ugly frame.  Think "builder grade kitchen cabinet" color 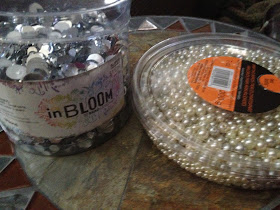 Then the fun began.  I glued every single one of those suckers on...one by frickin one. 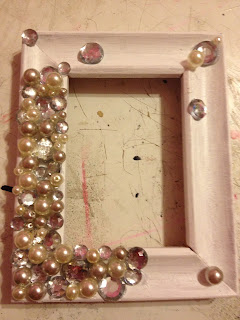 Please excuse my grimy work station.  This is literally the same "lap desk"  we've had in my family since who knows when. Literally....I'm pretty sure it's older than me.  I don't remember a time not having it.  I think it belonged to my 2 oldest sisters and considering I'm the baby and younger by 12 years.....the thing is pretty damn old.  But it has held up like a champ and I kept it....apprently I love it?  I think the cuts, sticky glue areas, and marker marks give it some character.   Or does that just make it dingy?

Anywho....just keep gluing. Just keep gluing. What do we do we gluuuue!   Can you tell I'm pumped for the release of Finding Dory?   We only have to wait until the end of 2015...Crimony!

After you are done gluing, cut a piece of scrapbook paper or fabric to fit inside the frame.  I glued the paper to cardstock to make it more sturdy.

Take a pearl pin and position where you want it on the paper and push through.  Once it's through bend the pin down straight so it lays flat and hot glue it into place like this 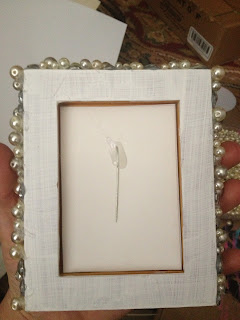 Then after hours and hours of gluing and burning yourself....you're done! 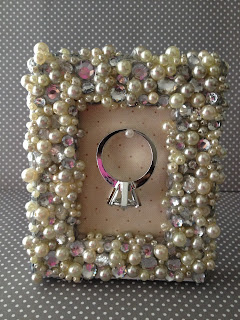 I made this for a friend that's getting married.  I really want one for myself considering how I put my ring in a cup right now....but I'm usually only willing to commit to a labor intensive project once.  The second time I just get annoyed and bored and get a "been there, done that attitude"    Just blame it on my ADD babayyy.  (name that song!)

Sooo...back into the cup my ring will go